Supporting Biodiversity and Promoting Environmental Communication for the Global Environment

In all our business activities, we are mindful of biodiversity and strive to preserve and mitigate our impact on ecosystems. We take action to preserve the forests around Shimanto River in Kochi Prefecture and to preserve Lake Biwa in Shiga Prefecture.

In 2011, we released a groupwide policy on timber procurement to enshrine our commitment to sustainable use of forest resources. Since our foundation, timber has served as an important resource in our products, such as paper. Recognizing the vital role forests play in mitigating global warming and supporting biodiversity, we aim to promote harmony with forests by ensuring that our timber procurement is legal, transparent, and sustainable.

In procuring forest resources, we pledge to observe the following principles and continually strive for more ethical and sustainable procurement.

1. Make procurement more transparent, mindful of the problem of illegal logging and related timber trade
2. Choose timber suppliers in a more meticulous and scrupulous way to promote the sustainable use of forest resources
3. Recognize the valuable roles that forests play in local communities and ensure that procurement activities preserve and facilitate these roles

Certified as a procurer of legal and sustainable timber

After the Act on Promoting Green Procurement was strengthened, were certified as a “procurer of legal and sustainable timber” by the Japan Office Institutional Furniture Association (JOIFA). In line with the new legal requirements, we strive to ensure that the timber we use is legal and sustainable by providing a paper trail to show how the timber is procured and used and by appointing the right people to manage this process. In 2003, we received chain-of-custody (COC) certification from the Forest Stewardship Council (FSC®). The FSC® is an international non-governmental organization that runs a system of third-party forestry certification. Its purpose is to preserve forest environments by promoting a responsible form of forest management that benefits local communities and is economically sustainable. COC certification applies to the processing and distribution of FSC®-certified products. The organizations in our group that have obtained COC certification are KOKUYO, Kaunet, and KOKUYO Product Shiga. The FSC® has approved our products, including our printer paper and notebooks. In 2016, we received COC certification under the Programme for the Endorsement of Forest Certification (PEFC). The PEFC is a forest certification scheme. Its criteria is based on accepted intergovernmental standards. We aim to get more of our products certified for their sustainable use of forest resources. (FSC® License code: C004748) How we have used forest resources

In 2021, we used around 7,100 tons of wood in furniture products, equivalent to 14% of our total raw materials (excluding packaging materials). Of this wood, 21% consisted of rough-cut lumber that was made into solid wood or engineered wood (including plywood). The remaining 79% consisted of forest residues (byproduct from thinning or clearing) or engineered wood (including medium-density fiberboard and particle board) made from such. Each year, we report such data to JOIFA, the body that certifies us as a “procurer of legal and sustainable timber,” in compliance with the Act on Promoting Green Procurement. As per JOIFA’s reporting guidelines, we try to identify the wood species among the timber we use.

* The data in the above table has been aggregated from the figures provided by each supplier. The data covers only wood from rough-cut lumber.
* The table shows only wood species for which we could identify the country or region.

In 2006, we launched a project to conserve a public forest in the Taisho district of Shimanto, Kochi Prefecture, which we named Yui-no-Mori (“linkage forest”). In this project, we thin the forest and make effective use of the resulting timber. Our purpose is to lead the way in reviving manmade forests and restoring the link between the natural environment and local livelihoods. In 2007, the project earned FSC® certification. Today, Yui-no-Mori has a surface area of 5,425 ha, and a cumulative area of 1,989 ha has been thinned. Kochi Prefecture awarded us the “CO2 absorption certificate” in 2007. In 2020, the forest absorbed 5,368 tons of CO2 in that year. The cumulative total for April 2006 to March 2021 stands at 67,390 tons.

In 2022, the project earned three more accolades: the “grand prize in the conservation in practice category” at the Japan Nature Conservation Awards 2022 (in January), a “sustainability action” commendation from the Ecological Life and Culture Organization (in October) and the “18th philanthropy grand prize” from the Japan Philanthropic Association (in December). That year marked the eighth time the project earned recognition. In 2017, it won the Japan Wood Design Award; in 2018, it won a “green wave” prize at the Biodiversity Action Awards; in 2019, it won a commendation at the Low Carbon Challenge Cup and a “minister’s prize” in the corporate category of the Ministry of the Environment’s Environment Good Life Awards. On July 16, 2021, Kochi Prefecture awarded KOKUYO and Kaunet a CO2 absorption certificate in recognition of the fact that we offset a total of 5,368 tons of CO2 (KOKUYO offset 4,848 tons and Kaunet offset 520 tons). The award ceremony was held at the prefectural office. Presenting the award, Toyonaga (who is the deputy head of prefecture’s department for forestry and the environment) thanked the two companies for contributing over the years to Kochi’s efforts to preserve its environment, manage its forests, promote local industry, and support its PR.

The 5,368-ton offset represented 15% of the group’s total CO2 emissions in 2021 (35,926 tons). As well as preserving forests, this effort proves valuable for mitigating climate change.

Yui-no-Mori has enjoyed FSC® certification since 2007.
Following a regular audit performed on 29 and 30 September, 2020, the project was recertified. 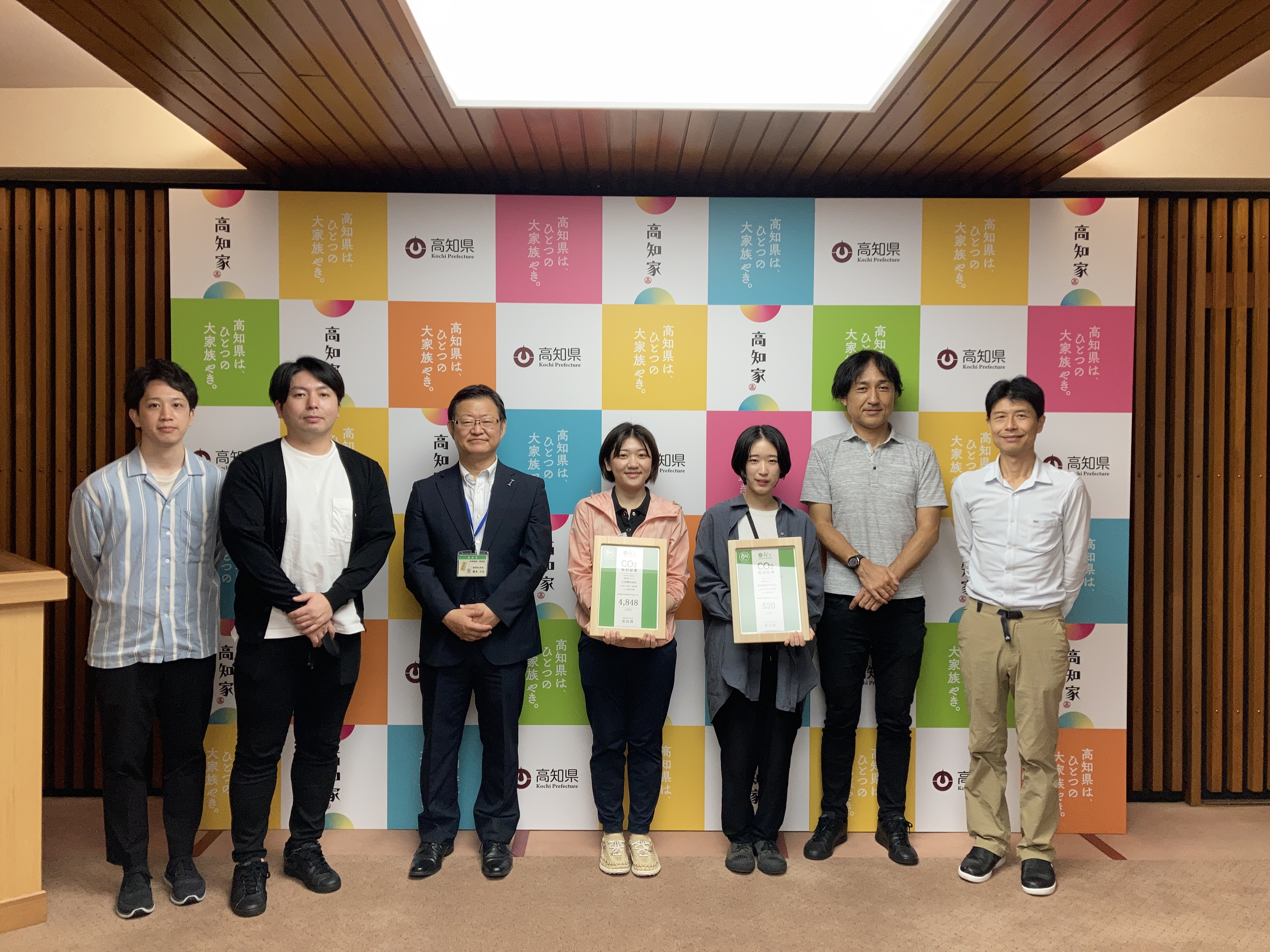 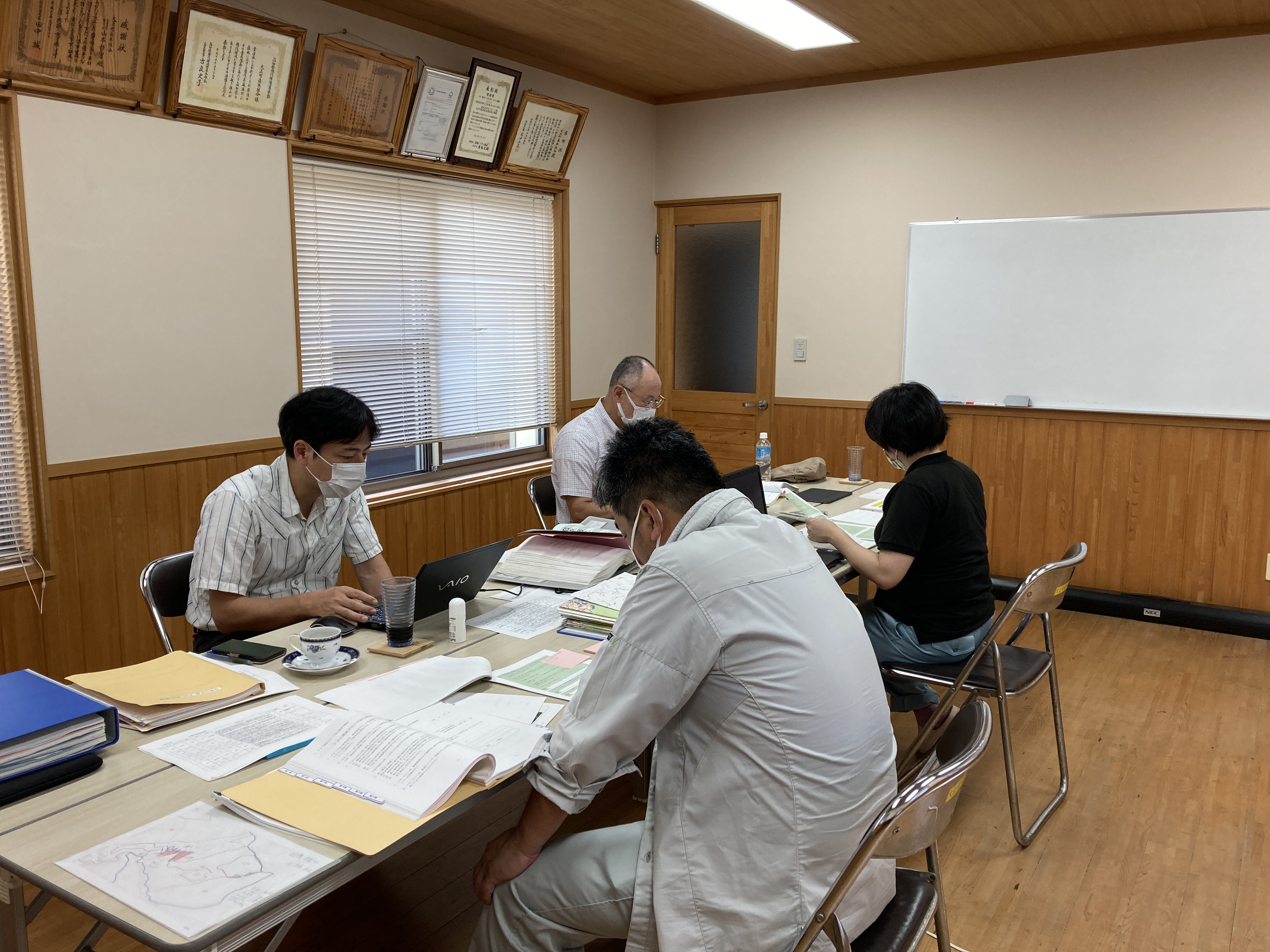 An FSC® certification audit in progress

An important part of forest conservation is seeing the outcomes of thinning. We monitor these outcomes over the long term in partnership with Shimanto Forest Union, Shimanto High School, officials of Kochi Prefecture and Shimanto. On July 17, 2021, we measured the water quality of Shimanto River. On November 20, we conducted a vegetation survey. We conduct regular vegetation surveys in two locations.

Using the byproducts of thinning

Since 2000, we have used the byproduct of thinning work to make furniture products in partnership with Shimanto Forest Union. In 2007, Kaunet started marketing furniture under the Yui-no-Mori brand. As of 2021, the distributor offers 12 Yui-no- Mori furniture products. To help spread the word about Yui-no-Mori, Kaunet launched a scheme in 2008 whereby customers can use their loyalty points to fund the thinning work. In 2021, there were around 140 applications for the scheme. Kaunet has donated 1% of the proceeds from some Yui-no-Mori products to an afforestation campaign (Midori no bokin; “green appeal”) organized by the National Land Afforestation Promotion Organization. 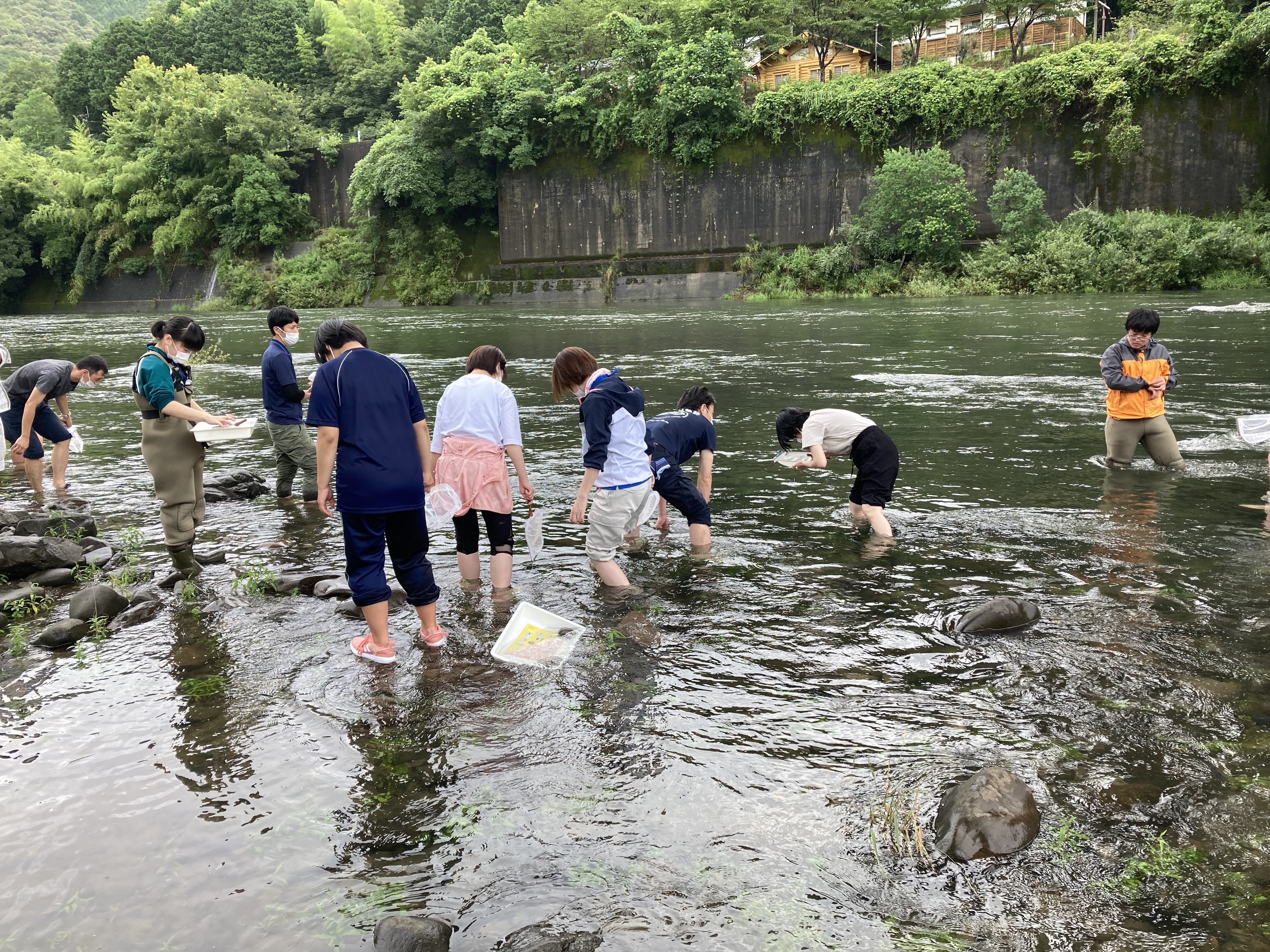 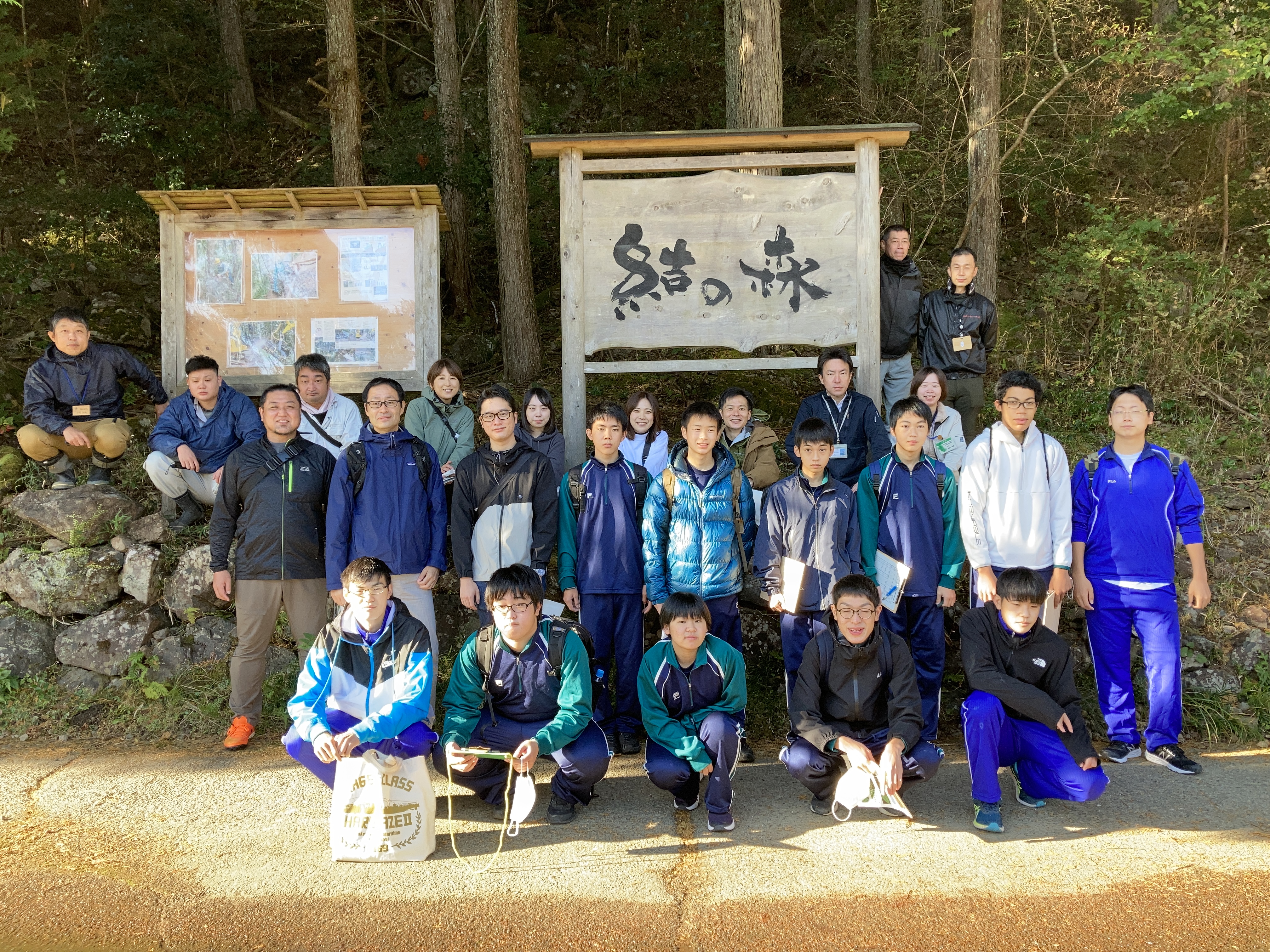 Participants in the vegetation survey The reeds of Lake Biwa play an essential role. They provide an aquatic habitat, support biodiversity, and absorb CO2. In the past, the reeds served as material for roofing and sudare screens, but with the decline of such traditional industries, the reedbeds are no longer maintained so well. The lake once had 260 hectares of reedbeds, but only half remains. In 1992, Shiga Prefecture passed an ordinance to address the problem by conserving, cultivating, and using the reeds. Believing that such action would preserve Lake Biwa’s beautiful environment and fight climate change, KOKUYO Product Shiga (which operates near the lake’s shore) launched ReEDEN Project in 2007 to raise awareness about the reeds and promote their use.

Winter reed cutting is essential for reed cultivation. At Lake Biwa, this task is performed by a network of volunteers called the Network for protecting Lake Biwa through reed management. Formed in 2009 on the premise that it takes more than one organization to protect Lake Biwa, the network aims to bring on board a variety of local organizations. To that end, members visit business premises and share the message about Lake Biwa as a way to persuade the organization to take an interest in local environment. Consisting initially of several companies that shared the same vision, the network now encompasses 132 companies. For more than ten years, the companies have worked with universities and local government to undertake the winter reed cutting (which takes place three times a year, from December to March). In recent years, participation in the cutting had expanded from company employees and family members to include local residents, public servants, museums and schools. With approximately 300 participants, the event had grown into one of the largest reed cutting activities in the prefecture. However, we have refrained from holding events for the Network due to the impact of COVID-19 since last year. We are continuing conservation activities on our own at a smaller scale. 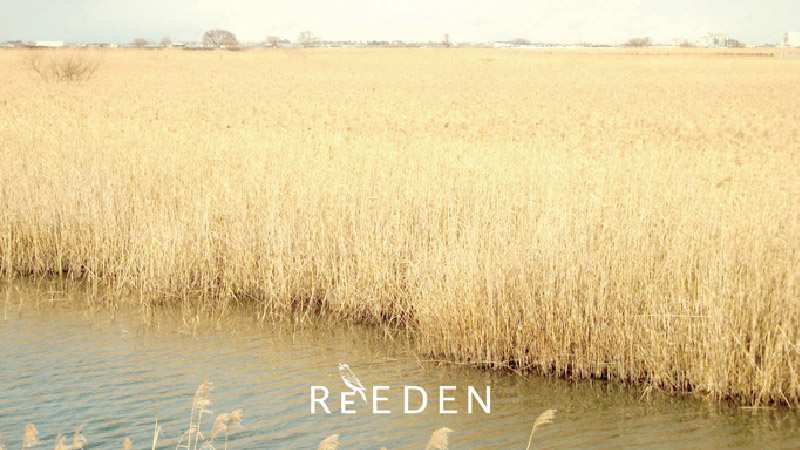 An expanse of winter reeds February 8, 2020: Winter reed cutting event (the event was held just before a surge in COVID-19 infections) How reed conservation can contribute to a low-carbon world: Showing the impact

Previously, the reed conservation work was evaluated using just a single metric: the area of lake in which reeds were conserved (the only data point released by Shiga Prefecture). It was felt that there was potential for broader scientific evaluation. Meanwhile, across the country, conservation groups were promoting rate of carbon sequestration (capture and removal of CO2) as an index for measuring the effects of forest thinning and other forest management work. Given that reeds also absorb CO2, we decided that we could use the same measure for ReEDEN.

In 2017, we started inviting researchers to conduct a biomass survey during the winter cutting. Across a three-year period, the researchers measured reed height, density, weight, thickness, and carbon sequestration. Consequently, we established a methodology for showing the extent to which ReEDEN offsets CO2 emissions. Whereas before we could only evaluate the project in terms of area conserved, we now had a completely different perspective. This biologic approach was praised by a group of academics who had formed a committee to conserve reedbeds in the prefecture. Members of government, academia, and industry joined forces to develop a tool that measures CO2 absorption in reeds by multiplying reed cutting area by reed height equivalent. Released at the end of 2019, the formula has been published on Shiga Prefecture’s website. With the release of the tool, people can now see how the project is contributing toward a low-carbon world. The data has demonstrated that the project is mitigating climate change in addition to improving the lake’s water quality and biodiversity. This knowledge has boosted participants’ motivation and brought more people on board. The project team plans to expand use of the tool with a view to benefiting the whole of the prefecture. The team’s vision is to follow up the carbon sequestration work in forests across Japan by developing an unprecedented carbon sequestration system for lakeside environments. 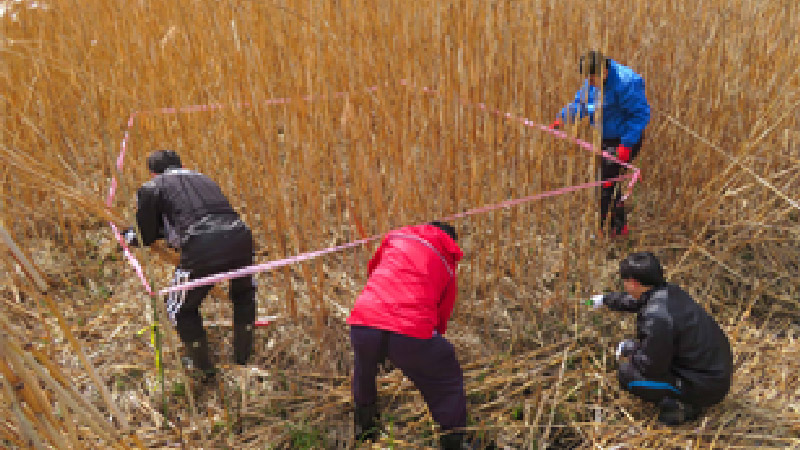 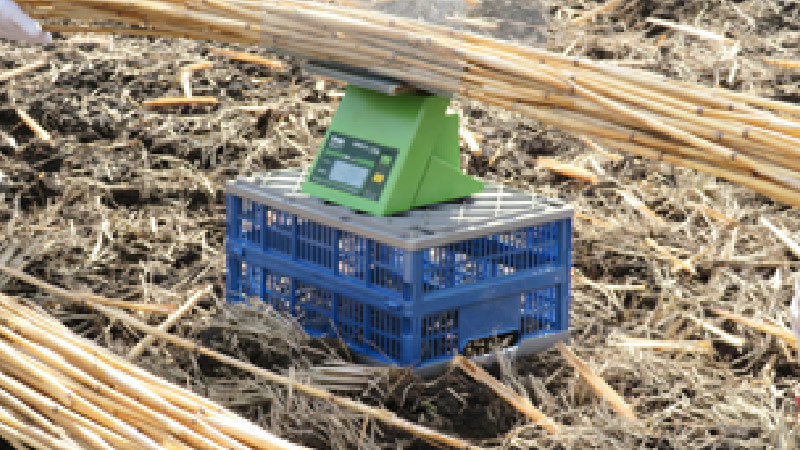 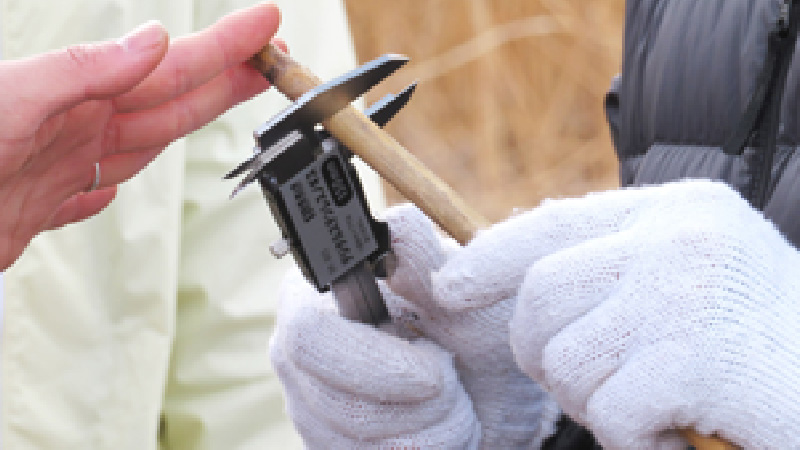 Following on from last year’s Minister of the Environment’s Award for Climate Change Action, we received the Human Development Award, a special award from the Executive Committee, at the 9th Good Life Awards for the second year in a row from the Ministry of Environment in December 2021.
We were able to receive this award because this project, which has been praised for water quality purification, biodiversity, development of young people and mitigation of climate change, serves as an outstanding activity that realizes a good life for the environment and society.
As a local project, ReEDEN may be modest in scale, but it continues to play a valuable role in contributing toward sustainability. 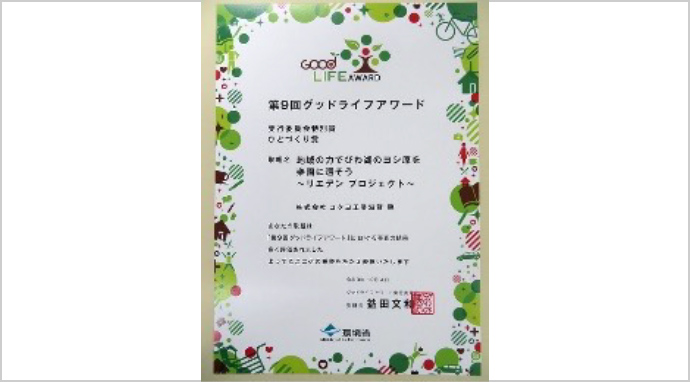 The activities in the ReEDEN Project received the Human Development Award, a special award from the Executive Committee, at the 9th Ministry of the Environment’s Good Life Awards

The Good Life Awards were established in 2013. This was the ninth time they have been held. The awards are a project to seek and support good life for the environment and society and steady initiatives (volunteer activities, services and technologies, etc.) to support that. The aim is to create opportunities for each individual to reexamine their current lifestyle and to create lifestyle innovation and strengthen partnerships to realize a sustainable society.
The Executive Committee reviewed 192 entries this year. It then awarded us the Human Development Award from among the special awards it gives as a result of that review. 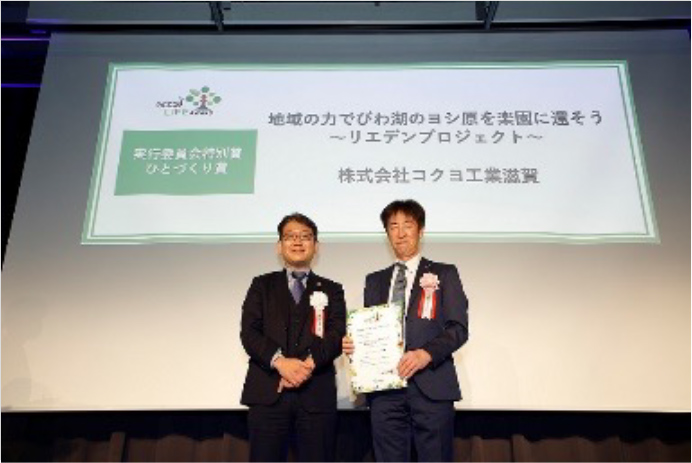 Read all the latest information on KOKUYO news, events and activities